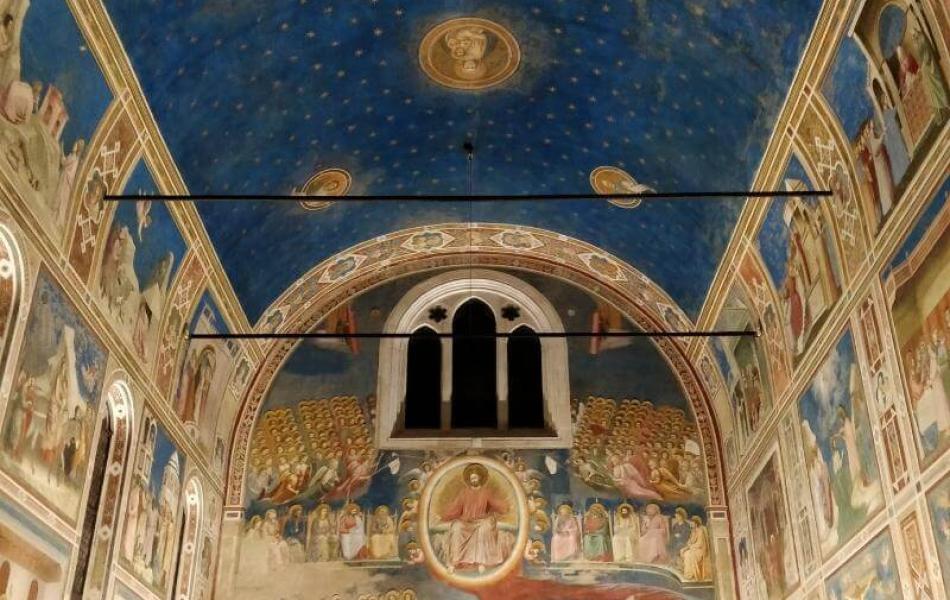 Defined as 'Padua Urbs picta', the art of the 14th century is preserved in different buildings and places scattered around the historic centre:
- the Basilica and the Convent of the Saint
- the Scrovegni Chapel
- the Palazzo della Ragione
- the Baptistery of the Cathedral
- the Church of Saints Philip and James at the Eremitani
- the Chapel of the Reggia Carrarese
- the oratories of San Giorgio and San Michele

The incredible artistic flourishing of the 14th century is largely due to the arrival in the city of Maestro Giotto in 1302, who initiated a season of rare beauty, subsidised by private patrons and rich bankers. Courts in this period were excellent incubators of talent and artists, and it was within the ranks of one of these courts, the Carraresi, that we see the city change and affirm its role as a European cultural and artistic centre.

In fact, the pictorial cycles also represent the "image" of the politicians who governed Padua and, walking among these wonders, we can find a cross-section of what was the political and social life of the time.

The Basilica and Convent of the Saint

This is where the first traces of Maestro Giotto's presence in Padua can be seen. It is visited by almost 7 million pilgrims a year and the frescoes inside are a splendid picture of the 14th century, in which dozens of artists of the time took part. CURIOSITY: It is one of the largest churches in the world despite not being the city's cathedral, a role played by Padua Cathedral.

Frescoed by Giotto in just two years, its main theme is 'The Last Judgement'. Despite the purely Christian theme, the artist painted the faces to reveal clear and well-detailed feelings, with the clear intention of telling a story to all those who would have access to the site over the years, regardless of background or religion. The Chapel tells a story, which should be read from left to right and from bottom to top. CURIOSITY: These frescoes demonstrate Giotto's early interest in perspective, if you think that in Europe it would not be studied until 100 years later, in 1400.

The former seat of the city's courts and market, its imposing grandeur exudes charm and respect. The upper floor is entirely occupied by the largest hanging room in the world. The original painting cycle, attributed to Giotto, was destroyed in a fire in 1420 and the frescoes we find now are by Niccolò Miretto and Stefano da Ferrara. Each segment represents in order: an apostle, the allegory of the month, the allegory of the sign of the zodiac, the planet, the trades and the constellations; all this creates a perfect representation of life between Earth and Heaven. CURIOSITY: Inside the hall, the "Stone of Vituperio" is still preserved, on which insolvent debtors were obliged by the judge to strike their buttocks three times after having half-naked themselves (hence the expression "to remain in cloth trousers").

Dedicated to St John the Baptist, it is located next to the Cathedral of Padua. It is considered part of the pictorial cycle of the 14th century thanks to the splendid frescoes preserved inside, the work of Giusto de Menabuoi. CURIOSITY: In these frescoes the figure of Christ takes on the role of the lord of cosmic time. We see him interrupting the course of meteorological and natural events such as eclipses and neutralising demonic figures that endanger life on Earth, in a much more active and interventionist role than in other representations of the time.

One name above all: Andrea Mantegna, who did some of his earliest (and unmissable) painting here. CURIOSITY: Used for military purposes because of its proximity to the railway station, the Church was bombed by the English troops in 1944. Although severely damaged, it managed to withstand the blast of the bombs and was later restored using mostly material recovered from its own ruins.

The Chapel of the Reggia Carrarese

Part of the complex of buildings that the seignory of the Carraresi had built inside Padua as their residence. The palace is now largely destroyed but retains a real gem: the private chapel. Painted by Guariento di Arpo, it largely depicts themes from the Old Testament and the scene of Judith beheading Holofernes certainly stands out. CURIOSITY: We have to imagine the Royal Palace as an instrument of military utility as well as a residential building: the royal palace was connected to the city walls by a ferryboat, a 186-metre-high elevated passage resting on twenty-eight arches, 9 metres high and 3 metres wide, demolished in 1777. From here, in case of need, the prince could reach the walls and then the castle in complete safety.

The Oratories of St George and St Michael

The Oratory of St George stands outside the oldest city walls and houses a chapel, completely frescoed by Jacopo da Verona, whose pictorial cycle revolves around the life of the Virgin Mary. If you have already been to the Cappella degli Scrovegni, this place will seem familiar to you: the starry vault and the large frames testify to Jacopo da Verona's closeness to his master Giotto. Although he was never his pupil (we are almost in 1400), the artist completes "the pictorial cycle of the 14th century" introducing all the innovations that Giotto had first experimented almost one hundred years earlier: the fresco technique, perspective and the use of space, the definition of moods on people's faces, the taste for visual narration and the desire to tell a story through frescoes. CURIOSITY: As the crow flies, this UNESCO site is only 1,700 metres from the Scrovegni Chapel, almost as if to close the entire path of 14th-century pictorial art in Padua.

As we have seen the whole city is finely intertwined with Italian arts and culture and helped lay the foundations of the later Italian Renaissance, we at DC Hotel International are deeply attached to the city's history and look forward to welcoming you to beautiful Padua!

On our official website we always guarantee that you will have the best available rate and exclusive offers for an unforgettable stay, whether your are travelling for business or pleasure.

To confirm your reservation with a credit card, this site uses a secure server, according to the worldwide encryption standard Secure Socket Layers (SSL).

We are always at your disposal during the booking process as we aim to help you find the best solution for your stay. Contact us by phone on +39 049.7641333 or by email at info@dchotel.it